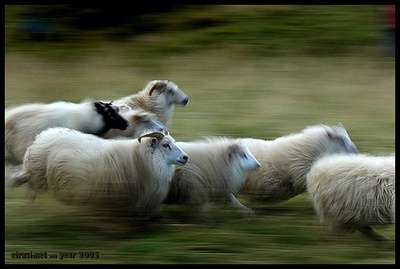 Early this morning, a woman strode purposefully through the drizzle across London Bridge.

No real news in that, except that she did this accompanied by six sheep (New Romney rams, for sheep-lovers amongst you). Amanda Cottrell, a Freeman of the City of London, took advantage of the ancient right to drive sheep across the bridge toll-free as part of a publicity stunt to raise restoration funds for Canterbury Cathedral and also, schizophrenically, to promote Kent-produced food.

A Kent press officer desperately press released about the event to drum up interest, promising some serious D-listers - some minor royals, and "popular TV chef" Gary Rhodes - who in the end don't seem to have managed to get up this morning to join in (well, it was at 7am so they will be busy out clubbing somewhere).

We did some digging about this ancient sheep-related right. It has been in place since 1237, after which time anyone who belonged to a trade guild had to sign up as a Freeman which afforded other useful rights too:

1. the right to go about the City with a drawn sword (seems unwise, you could have someone's eye out)

2. the right to avoid being press-ganged (i.e. you couldn't made to join the military)

3. the right to be drunk and disorderly in the City (like the absent D-list celebs, then)

4. the right to be married in St Paul's Cathedral (the canapes must cost a *fortune*)

5. the right to be buried in the City (not bad - except that the graveyards in London have at various points overflowed)

6. the right to be hanged from a silken rope (classier, maybe, but still, immunity from hanging altogether would be better, no?)

To apply to be a Freeman (along with 1,800 others each year), you need to be over 21, of 'good character', pay a 'fine' (£30) and get some referees. Or avoid the whole process and be awarded an Honorary version like Pavarotti.

Despite the obvious disappointment at this morning's lack of Rent-A-Crap-Celeb, it's generally believed that the sheep had a lovely time, although they were slightly alarmed at the promotion of Kent lamb as part of the protest which, at best, they considered un-ewe-sual (sorry).