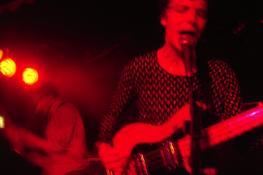 Tasteful knitwear and tight trousers - just another night at the Soho Revue Bar? Not so, for the Friendly Fires came to town last night, to play an intimate sold-out gig in the risqué environs of the venue.

Amongst the chandeliers and red velvet sofas, Ed Macfarlane, Jack Savidge and Edd Gibson give a killer performance to a hip young crowd before they jet off to complete an American tour. St Alban’s slickest exports released their acclaimed single ‘Paris’ earlier in the year on XL Recordings, and since then those in the know have been eagerly rubbing their hands and ironing their low-cut sweaters in long-awaited anticipation of the band’s debut album.

Stepping into the angular, dance-rock-shaped hole dug by acts like the Foals and LCD Soundsystem, Friendly Fires are known for their electric live performances, and tonight is no exception. Lead singer Ed Macfarlane groans, sweats and jumps into the crowd like there will never be a tomorrow, or at least one with any music in it; Jack Savidge thumps frenetically at his drum kit and Edd Gibson attacks his guitar in a similar manner. They move around and swap instruments, Macfarlane swiping at the cowbells in a frenzy of noise and crescendo and exertion. The band possess a rare sense of confidence for a group so young, backed up no doubt by their slick musical abilities.

For some reason the crowd are a little flat, standing shyly and tapping their feet instead being drawn into of the dance-fest that often accompanies this kind of performance. They warm up a little bit at the sound of infectious 'On Board', and even more so when the band play the wonderful, pulsating 'Paris'. This is music to dance to - it ain’t going to change the world, but it will bedeck it quite nicely, thank you very much.

'Those Friendly Fires are some sick shit', comments a young Hoxtonite on the way out. Londonist isn't quite sure what if they understand what they mean, but we think we agree.