The goodly burghers of Peckham have got their rose-tinted spectacles on again as the annual I Love Peckham festival approaches. In truth this oft-maligned corner of south east London is about as cutting-edge arty-farty as it gets, and the festival aims to showcase this. And, er, yes, to help paint over the rather unfortunate image with which the area is often tarred: one of the main themes of this year is rebranding and misconception. 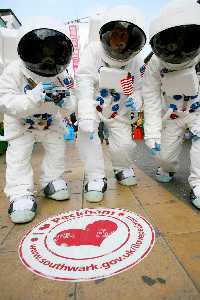 There’s a whole week of events running from Monday 14th July to Sunday 20th July. The one that immediately grabbed Londonist’s attention is the Consume Peckham project, which involves a bunch of artists invading a bunch of local shops and doing a bunch of really clever things with them. We also like the look of Life in Peckham, where art and history meet: Arts Express are the organisers, and the expo is to be found in the mysterious, cavernous, looking-glass world of Area 10. Or try the Chronic Art Foundation at the Bussey building, a rare and endangered colony of seldom spotted artists working out of an abandoned warehouse. Don’t you just love poking around behind doors that are normally closed?

The big stuff is going on on the 19th and 20th: we don’t know if there’ll be jelly and ice cream, but there’s a hell of a big street party going on. So if you are without gainful employment next weekend, or just fancy a bit of a larf, get thee to SE15.