Black Cabbie Proves His Worth in Photographic Exhibition 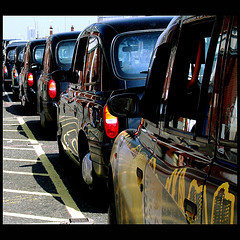 Next time you turn down a proffered tête-à-tête with a chirpie cabbie, you could be missing out on a satisfying cultural exchange. Who knows whether your driver is a painter, origami champion or candle-stick maker? Black cab driver Dominic Shannon has spent nine years of his career taking pictures of city life, warts and all. While other cab drivers pass the time by attempting to splash foolhardy tourists standing in close proximity to puddles or collating Magic FM trivia in their enlarged brains, Shannon has made the most of his lofty perch on London’s population by making a visual library of its highs and lows. Now an exhibition of the cabbie’s varied work is being shown in Camden, mixing sun-splashed landscapes, famous landmarks and celebrity spots with a darker side of London, portraying homelessness, physical violence and alcohol and drug addiction.

Far from being a mere mode of transport for the cash-rich, the London cab can be a forum for a lively exchange on life in London. Once again voted the most iconic vehicle in Britain, the black cab is featured in countless films and cultural references. This Saturday BBC Four are airing their "Cab Driver" documentary, The Knowledge has inspired an upcoming quiz at the London Transport Museum and the vehicle has recently been home to the wonderful Black Cab Sessions.

But it’s not just the passengers who are responsible for cultural output. A born and bred Londoner, Shannon’s achievement is a satisfying example of breaking down the artificial barriers around who can be ‘creative’ or not, and a cockney-style Vincent Van Gogh to those who would police them. He doesn’t identify with an artistic subculture as such, pointing out ‘I normally pick these people up in the back of my cab. Now I’m not just a driver. They’re interested in what I’m doing’. Thus proving that Peter Boyle’s observation in Taxi Driver that ‘you get a job, you become a job’ is only the case in the movies.

Dominic Shannon’s exhibition ‘London Through the Eyes of a Cabbie’ can be seen at Kodak Express on Camden High Street today.

Image courtesy of Martinh's Flickrstream via the Londonist Flickr pool.