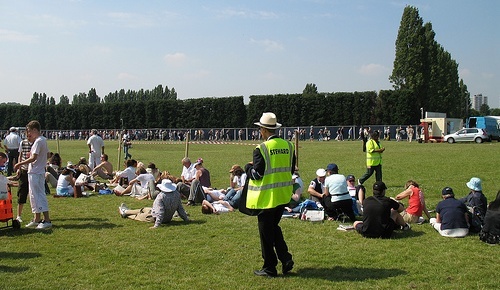 If you're reading this, then it's already too late to get in line for a show court ticket to the opening of this year's Championship at the All England Club, otherwise known as Wimbledon 2008. The good news is you still have eleven further chances to witness start of play on Centre Court, which this year has its roof back in place, as well as many other opportunities to experience a grand day's tennis in SW19 with a little help from our guide to possibly the world's most famous queue.

In previous years there were two queues heading away from Gate 3, one north and the other south, but the big news is that this year there's only one which will be established in Wimbledon Park including for roughly 2,000 overnight campers each night who will be getting a 6am wake up call from Wimbledon Stewards before moving their vehicles to official car parks, taking their camping gear to the Left Luggage facility and seeing around 7:30 if they're amongst the fortunate 1,500 or so to be allocated an all-important coloured wristband indicating entitlement to a ticket for Centre, No. 1 or No. 2 court. After those have gone there will still be as many as 9,000 general entry tickets available, but Chief Steward, Andrew Gairdner, reckons that by 10am there will already be more people than that in the queue. Those missing out will need to wait for people inside to leave, which Gairdner says doesn't usually happen in significant numbers until 6pm.

There is, however, an officially approved way to secure a prized seat without enjoying a night in the park at all. Every evening around 8:30pm about 500 Centre Court tickets are made available via Ticketmaster for the following day's play at £38 each. In addition, returned Centre Court tickets may also be available at the same price.

Picture of the 2006 version of the queue via batsignal's Flickr stream.

If you do decide to queue in person, bear in mind before setting off to Wimbledon that queueing to watch the action is almost as serious a business as playing. The official site advises that, on joining the queue you receive a dated and numbered card that you must keep until the turnstile, sales are strictly one ticket per person and neither equipment nor another person may hold a place for anyone unless there has been previous negotiation (for toilet breaks, etc.) with surrounding queuers and preferably a steward. Remember also that you may take in only one bag, which must be soft-sided and measure no more than 18” x 12" x 12" (45cm x 30cm x 30cm).

And if you are filing through the Park today, keep an eye out for Amanda Holden who's offering to face queuers across the net on a mini-grass court set up by the competition's soft drink sponsors, Robinsons. Those hoping to practice their 120 mile an hour serve on Simon Cowell will have to wait for another year.