Back To Basics Beijing For Boris 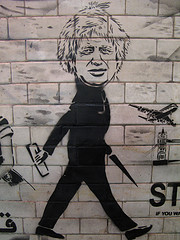 The Ramsay brand and a £400 a night hotel were among the items struck from the budget for London House - our city's presence at the Beijing Olympics this August - at last night's meeting of the Olympic Board, chaired for the first time by Mayor Johnson.

Bozza's frugality saw over £1 million knocked off the bill for London's PR exercise as 18 Ramsay chefs were deemed unnecessary for hospitality and the City Hall delegation to the Games reduced to essential personnel only. The new Mayor is putting our money where his mouth is and opting to stay in a cheaper hotel than was booked for Ken and asking to fly economy (although the chances of BA not upgrading the blond bombshell in all his humility for the 16 hour flight are pretty much nil).

It's a coup for Johnson whose election campaign promised to make City Hall accountable and crack down on 'extravagant' spending. We're just wondering if he and his delegation team of "three senior advisers, two diplomats and five official observers" from City Hall will be getting busy in the London House kitchen now the catering staff have been axed?