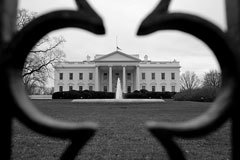 Today, Boris Johnson's New York counterpart, Michael Bloomberg, is coming to town. The pair will exchange tips about the challenges of running effectively the two most important cities on Earth, and they'll be chinwagging about the pros and cons of their relative roles. According to the Beeb, Boris will be envious of the hefty £30bn budget his doppelgänger controls, while Bloomberg will eye the meager legislative red tape that allows schemes like the congestion charge to be implemented: a similar New York project was recently defeated by state lawmakers.

However, is it possible that their cogitations may stray from the municipal level to politics of a more lofty stature? After leaving the Republican party last year, Bloomberg was frequently mentioned as an independent candidate for the 2008 White House race. He categorically denied this earlier in the year, yet it's certain he was considering it and hence knows a thing or two about a presidential run.

What's this got to do with Boris? Well, according to US journalist R. Emmett Tyrell Jr., Mr. Johnson would be the perfect Republican candidate. How so? Well, he was born in New York, and despite rumours that he gave up his citizenship a few years ago, the American Spectator magazine claims that Boris in fact still holds a US passport. Moreover, his "libertarian" form of conservatism and instinct for "employing government only in those areas where government is needed" make him, in Tyrell's eyes, ideal. Could Boris go one beyond the Governator and claim the biggest prize of them all?

Or is this the most preposterous idea since, well, since some wag suggested he run for Mayor of London? Chuckle as many did at the time, we all know how that turned out.

Image of the White House from Scott Ableman's Flickrstream