Police To Prosecute Teenager Who Called Scientology A "Cult" 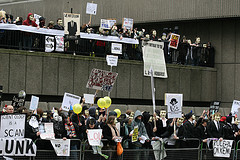 If it looks like a duck, walks like a duck, and quacks like a duck, chances are it's a ... This was our thought upon reading the news that a teenage member of Scientology-protesting group Anonymous, who goes by the name EpicNoseGuy on the Enturbulation forums, had his sign confiscated at the May 10th anti-"Church" of Scientology protest in Queen Victoria Street by the City of London police, and has been issued with a court summons - all for using the word "cult" to describe the controversial "religion". If Scientology is listed on the Cult Information Centre, that's a pretty good indication it's a cult; if a High Court judge calls it a "cult" (Mr Justice Latey, 1984: Scientology is both immoral and socially obnoxious... [It] is out to capture people, […] and indoctrinate and brainwash them so that they become the unquestioning captives and tools of the cult") then maybe he has a point; if UK newspapers are unafraid to call it a "cult" (The Sun: "dangerous cult", Guardian), then, perhaps, a case could be made for putting the word on a placard to be waved at a peaceful protest.

How it went down: EpicNoseGuy was approached by police, who asked him to take down his sign. He refused, citing Justice Latey among others. The police returned a short while later, confiscated the sign and issued the summons, under section 5 of the Public Order Act. See it all on video here.

The use of the Public Order Act seems here to be on rather dodgy ground. The Act says that it is an offence to "[display] any writing, sign or other visible representation which is threatening, abusive or insulting" which will cause "harassment, alarm or distress" to anyone. Are Scientologists such delicate flowers that they can't take use of one little word? After all, it's not like they haven't done worse to their critics down the years – just ask Bonnie Woods.

It should also be pointed out that the monthly anti-"Church" of Scientology protests take place at two different locations, starting at Queen Victoria Street in Blackfriars, in the jurisdiction of the City of London police, before moving on to the Goodge Street recruitment centre, under the Met's watchful eye. And while the Met has zero problems with use of the c-word, the CoL police (yes, the same ones whose senior officers have accepted presents, freebies and accolades from the Scientologists) do have a problem. So that's one law, interpreted completely differently by two police forces in the same city to apply to the same person holding the same sign on the same day. Huh?

We have a sneaking suspicion this will turn out to be a giant PR footbullet for both the City of London police, and the London branch of the "Church" of Scientology - the story is, at time of writing, the most popular item on Digg. One peacefully-protesting GCSE student, who drolly talks of paying for a lawyer out of his "pocket money", versus the clunking fist of the state in a case about freedom of expression - it doesn't exactly look good, does it? Liberty has already come out in the lad's defence, with Shami Chakrabarti telling the Guardian:

This barmy prosecution makes a mockery of Britain's free speech traditions. After criminalising the use of the word 'cult', perhaps the next step is to ban the words 'war' and 'tax' from peaceful demonstrations?

We shall see, Shami; let's hope not.

The next protest against the "Church" of Scientology is on Saturday June 14; dress code is pirates; meet 11am at Blackfriars, or 2pm at Goodge Street; don't forget your V mask! See londonlulz for more information.

This article does not necessarily represent the views of Londonist