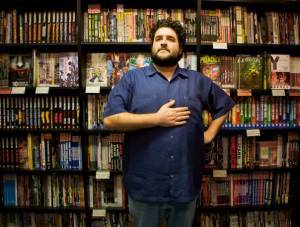 Imagine a style of comedy which combines a love of life with a quick wit, booming voice, and an encyclopaedic knowledge of every single movie that has ever been made, ever. For many years, people would have chased you out of the city for proposing such a ludicrous paradigm. But we've come a long way since the 70s. Thank goodness that, now we live in more enlightened times, one man has dared to bring film-based whimsy to the masses.

Richard Sandling has made big progress in the past three years. He's written two successful Edinburgh shows, won the prestigious 2007 So You Think You're Funny award, and has been a regular presence at all the most vibrant and fun indie comedy gigs around London, like The School for Gifted Children, Sunday Night Adventure Club, and Storyteller's Club, to name but ten. Soon, he'll literally be on everybody's lips. Read our interview so you can claim to have been into him before he was famous.

Hello! My name's Richard Sandling. I run a video shop called Ace Video in Southend on Sea, which only rents video, not DVD. Oh, and I'm also a comedian.

Let's talk about the movies thing first, because it's a massive part of your act...

Essentially, my act is about my passion and enthusiasm for video. They say that you should talk about what you know, and I really only know about loving videos and films. I try to stay positive, and let my enthusiasm carry the jokes. I try to make it irrelevant whether you've seen the film, and make it more about the passion behind what I'm saying. It's a strange thing, sometimes if I mention a film that the audience haven't heard of, they immediately switch off. They don't wait to see if they'll get it, they just assume they won't, and blank me. "What's going on? Just say willie or something! What are you talking about art house films for, you bumbling idiot!" So I always try to make sure that people stay with me.

You won the So You Think You're Funny competition at last year's Edinburgh Fringe. Tell us about that.

It was a really nice competition. The semi-finals were in Edinburgh, so I could see some of the other acts, and I was pleased because the people that I wanted to win, did, so I believed in the opinions of the judges. Often at competitions you'll be bewildered that someone rubbish could get through. I've lost competitions where I knew I'd lose, but then the person who I expected to win won't, and some idiot will get through instead. And I'll think "...really? You really thought they were the best person on the night? REALLY?" But there was none of that, which was really positive.

The final was tough because I was really hungover. I'd been up until 6.30am the night before, and then had to do my own show early in the day. Then I ate an Angus burger which made me sick, so I had a shower and a lie down, and almost collapsed of exhaustion. I had no food in my body, so I had to drink a load of Red Bull to keep me going... and then I won! Phill Jupitus gave me the award, and said "Dart's loss is comedy's gain!" And if you've ever seen me play darts, you'll know he's right.

Has winning the competition made a difference to your career?

It's really helped, because now when I call people up and ask for a gig, if I say that I won So You Think You're Funny, people know they can take a chance on booking me without having seen me. Having said that, when I went on stage in the final, I was REALLY tempted to apologise to all the TV people for being of absolutely no use to them. "Look, I know that this is the premiere talent-spotting competition, but I'm essentially fourteen years too old and fourteen stone too heavy to be of any use to anyone in a visual medium. I apologise, I'll be off in seven minutes."

How did you get into stand-up?

In 2005, I chanced a part in a low-key Whodunnit play at the Edinburgh Fringe. Josie Long was doing a show in the same venue, so I became friends with her, and I also met up with Wil Hodgson, who I was good friends with at university. I spent the whole of the festival with him, and as his show was at the Holyrood Tavern, we spent a lot of time there, meeting load of comedians who I'd never heard of before, but were all doing really exciting stuff.

Pear Shaped also had their show at the Holyrood Tavern, and Wil told Brian Damage that I was going to do five minutes - without telling me! So with no preparation, I got up there, did three jokes, told a rape gag, sang a song and left. And that was my first ever five minutes! But I didn't think about doing stand-up myself. Instead, I thought it would be great to bring those acts I met to Southend, so I set up my club about six months later, compered it, then a year later, I went back to Edinburgh with my own hour long show, having done barely any stand-up. And now here I am!

I loved it! Especially The Young Ones and The Dangerous Brothers. My cousins were ten years older than me, and taped loads of late night comedy. One of my earliest memories is of watching Ade Edmundson crash his bike into a wall because he's got no brakes, and thinking it was hilarious that you could have these men just screaming a lot and saying "bum".

I always liked Vic and Bob, Lee and Herring, Mary Whitehouse Experience, Sean's Show... I didn't know that it was alternative comedy, I just thought it was funny. And then The Comedy Store and Jongleurs got their own shows, and stand-up suddenly seemed really laddish. I always thought of doing stand-up, but whenever I saw it on TV it just seemed like this appalling bear-pit of drunken yobbish thuggery, where you just go on stage, insult the audience for twenty minutes, and then leave. I didn't see myself in that environment. So that first Edinburgh with Wil was a revelation. It showed me that if I wanted to do my sort of comedy, there was an audience for it.

Do you find the London comedy circuit different to the rest of the country?

A bit. It seems that as soon as you get outside of the M25, nobody has any interest in film-based whimsy! There's a lot of London gigs where people are really comedy literate, which is good, but at the same time they can also be quite blase about what there is to see, because they have so much choice. So when you go to a gig which isn't in London, like my old gig in Southend, the audience are always really up for it. I think people are fairly similar all over the place, Londoners just have more options.

What do you like about the London comedy circuit?

My favourite thing is the people. There are so many lovely people on the comedy circuit. I don't do gigs which attract horrible or spiteful comedians, so it's always really fun to be around other acts when I'm gigging. I also like the fact that I'm able to do whatever I like. I talk about movies, I do poetry, play the guitar, or talk about giant squid, and there are loads of clubs around the place where I can just turn up and do what I feel like.

What are your favourite London clubs?

I like Maff Brown's gig, Outside The Box, which is the one in the video. I've only played there once but I had such a wonderful time there, and I've never heard anyone say a bad word about it. Then again, I've not talked to many people about it, so perhaps that's a bit of a stupid statement. The two people I've spoken to about outside the box - Maff Brown and me - they say it's great!

All of Robin Ince's gigs are great fun, and Laughter In Odd Places is a joy. There's so many gigs where the people involved are brilliant. Like The 99 Clubs. I get really excited when I do them, because Holly Walsh will compere, Joe Wilkinson's will be there, Hemming Wehn and James Kettle will be there... it's always the people that get me excited.

What comics do you like on the live circuit at the moment?

I think Wil Hodgson is brilliant. I know he's my mate, but it would be a bit embarrassing if he was rubbish. I'd always have to lie about what I thought about his set. Thankfully, he's amazing! Some people tell story-telling in addition to their comedy, but when Wil does it, it seems to transcend comedy and becomes something infinitely better.

I can't help but love Pappy's Fun Club. I know they're a bit love-or-hate with some people...

Really? I didn't know that. Who are these people? Do they know they're incorrect?

Indeed! Well, some people think they're a bit studenty, but that isn't a criticism, that's just an aspect of their style. They'll say loads of different things if they like me, but if they slag me off, they'll generally say "He's fat, and he talks about films". Which isn't actually a criticism, it's just stating the facts! And it's the same with Pappy's. Some people don't like it because it's ramshackle, but that's exactly what attracts me to it.

Carl Donnelley is great. Holly Walsh, Josie Long and Tony Law are all amazing... Joe Wilkinson is really naturally great. Robin Ince is a genius. The turnover of material is astonishing, and the fact that it's all high-quality is frankly irritating! And Brian Damage and Krystal are ones of the best acts ever. There are certain acts who you couldn't book for certain nights because they don't match a certain attitude or style, but I'd book Brian and Krysstal anywhere. They're just the best. And if I know they're on a bill, I'm always pleased.

Rich will be performing a work-in-progress version of his next Edinburgh show, Kiosk of Champions, with Stuart Goldsmith at Ryan's Bar, Stoke Newington, on 20th May. Tickets on the door, 8pm start.