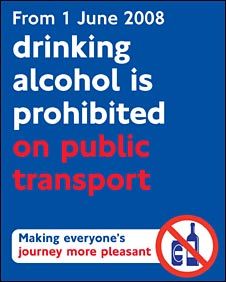 He may be new to office, but that hasn't stopped new mayor Boris Johnson from jumping in with both feet and whipping London into a more Boris-pleasing shape. As of Sunday 1st June, there will be no drinking on all London public transport. Well, no drinking alcohol, that is. (Can you imagine if Boris banned drinking water on the tube? Every other passenger would be fainting come summer.) But there will be no open alcohol containers allowed on the tube, buses or DLR from 1st June.

Boris had this to say about the big decision:

I’m determined to improve the safety and security of public transport in London and create a better environment for the millions of Londoners who rely on it. I firmly believe that if we drive out so called minor crime then we will be able to get a firm grip on more serious crime. That’s why from June 1st the drinking of alcohol will be banned from the tube, tram, bus, and Docklands Light Railway.

Apparently drinking on the tube leads to major crime. We really had no idea. But we suspect that the roots of banning drinking on public transport come from a slightly different place.

Taking a firm approach to public drinking in this way sends a strong message that public drunkenness is socially unacceptable and will support both the public and transport staff.

And we think that's the point - it's not public drinking Boris thinks is the problem. It's public drunkenness. After all, problems on the tube aren't caused by someone opening their first beer of the night, they're caused by someone drinking their twentieth. And that person was likely going to cause a problem regardless of whether or not they were holding that open beer in their hand.

We're not really opposed to the ban, as we can't see it negatively affecting anyone, but we're wondering where it's leading. What's next, Boris? A ban on public drunkenness? Because we think that will be a lot harder to control. This is London, after all.