The Price of Rice 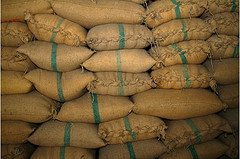 You’ve probably noticed that stuff keeps going up in price. Our friend the shop-keeper got a letter from the milkman today – there’ll be at least an extra 4p on the price of a pint of milk from next week, mark our words. When the milkman and the baker start sending out letters, you know things are getting serious.

But there is a far more pressing threat to the global economy than the mutterings of a corner-shaped retailer. There is a world rice shortage and prices therein have doubled in the last few months. And as something like 3 billion people depend on rice as a staple part of their diet, this is not good. Quite apart from real dangers such as famine, fears of rationing and hoarding have already sparked riots..

The causes are various, but the unfortunately eponymous US Secretary of State has sweepingly declared that it is because the world’s nutritional expectations have risen: we’re all just eating too much of the stuff. Condoleeza Antoinette’s comments are especially unfortunate at a time when American producers are set to cash in on the shortages. The International Rice Research Institute lists a far more complex series of causes for the current crisis: bad weather, drop in yield, increase in demand, loss of land to bio-fuel production, complacency.... They see the only way forward as being further investment in agricultural research

And how is this London related, other than by the fact that no man is an island entire of himself? Well, there have already been restaurant closures, and for a country that lists curry as a national favourite, this could have traumatic repercussions. An après-pub Indian could start to be a rather expensive luxury. But the truth is that in such a multi-cultural city as ours, this shortage is going to affect an awful lot of people for quite a long while to come.