Londonist Gets A Rub-Down At The Porchester Spa 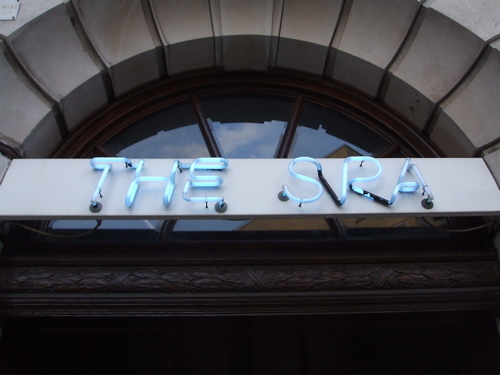 Behind an unassuming set of West London doors boils the Porchester Spa, an Art Deco palace of heat, steam and sweat. Completed in 1929, it’s a throwback to the days when the fate of fortunes and lives were decided by fat men in steam rooms – at least, if gangster films are anything to go by. The Porchester is owned by Westminster Council so it’s open to everyone, not just fleshy kings of the underworld. In search of a little old-school cleansing and relaxation, this law-abiding Londonista recently trundled down for an afternoon.

After plunking down your money – about 20 quid, less if you’re a Westminster resident – you’re presented with two towels and a thin gingham wrap. Then you strip. Downstairs in the baths there’s a sauna, two steam rooms, and three dry rooms. The temperatures vary in all of them, but you’ve gotta try the hottest stuff at least once. That means either the steam room with nearly zero visibility or the dry room that burns your feet. Once you hit the sweet spot between healthy sweat and heart attack, take a dip in the icy-cold plunge pool. It sounds scary, but it’s actually lovely and refreshing.

The Porchester also advertises shmeissing – “the Jewish art of steam room therapy”. A soft-spoken, enormous man called Lee massages you, then leads you into the hardcore steam room carrying a bucket of soapy water and what looks like a fluffy cat-o’-nine-tails. You get a thorough scrubbing with the fluffy thing and a final cold rinse. It’s not bad – you do feel pretty relaxed and awfully clean afterwards, but at £25 extra it’s a bit pricey. You don’t really need anything extra to enjoy yourself anyway. It’s easy to spend a few pleasant hours going back and forth between the baths and a deck chair in the cool main room.

The Porchester alternates between male- and female-only days. For gritty ambience, it seems a men’s weekday afternoon is the time. It was easy to overhear two chats about court cases and another about the Philippine prison system. If that’s not your conversational bag, it might be a good idea to bring a friend along, or go in the evenings or weekends. According to Lee, the best atmosphere is on a Sunday, when they run a mixed male and female session. But whenever you go, what you get is a relaxing retro spa day at council prices. So grab a wrap and get ready to sweat.