The Phallus Of The Opera 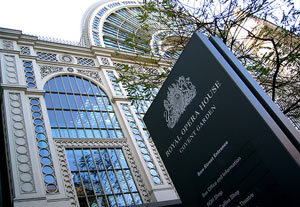 For good or ill, a man can be prickly when pressed on the subject of his, ahem, endowment. Spare a thought, then, for Juan Pablo Di Pace, who has seen his manhood manhandled by the marketing department of the Royal Opera House.

Cast in the crowd scenes for a 2001 production of Verdi's Rigoletto, Di Pace was surprised to discover some years later that his naked torso was used on posters advertising shows he had no involvement with. Stranger still: with the sensibilities of the opera-going public clearly in mind, somebody had taken the trouble to airbrush Di Pace's johnson out of the picture.

None too pleased, the Argentine actor filed a complaint. The Royal Opera House has confirmed that, indeed, they did use a manipulated photograph to advertise an upcoming show. While it is standard practice to re-use existing promotional snaps for impending productions, on this occasion the Covent Garden institution has stated it shall refrain from proffering up Mr Di Pace's adumbrated privates for further public scrutiny.

According to one source, the photo has also been manipulated in a number of other ways for promotional purposes, although the House was only willing to offer that, at one time, a cape was used to conceal the offending member. Still, it doesn't take the imagination of a young maestro to conceive of the wags in creative entertaining themselves by subjecting Di Pace père and fils to all sorts of Photoshop tomfoolery.