Richmond Park Cull: No Other Option?

By KizzieFK Last edited 151 months ago
KizzieFK Richmond Park Cull: No Other Option? 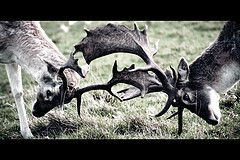 Animal lovers, we have a new cause for you.

While we understand that wildlife has to be managed on small preserves, we don't like to hear that about 1,200 deer have been shot in the Richmond Park cull over the past six years to keep the population at 650. This year's cull, ending Thursday, will rid the park of about 237 deer, up from 168 who were put down in the name of population control in 2002.

Old and young alike are subject to the rifle, as well as animals with problems that could lead to birth defects for future generations of red and fallow fawns.

Not a fan of this Bambi story, Susan Kramer, Richmond Park MP, has called on the Royal Parks Agency to relocate the animals instead of shooting them. Sounds like a reasonable solution which could save a whole herd of these graceful animals, but the Parks Agency has so far rejected the idea, saying the deer can't be released into the wild and moving them would cause too much stress for the animals.

Maybe it's time they look into birth control?

Photo of deer in Richmond Park courtesy of chrispercival's Flickrstream.