Premiership Game 39: Fools If We Think It's Over 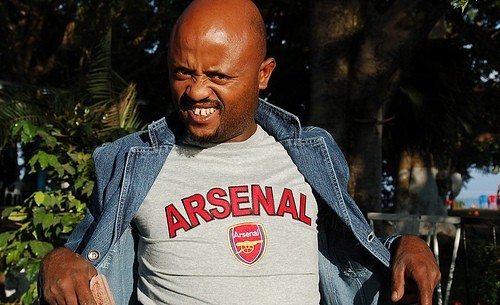 You can tell the vintage of an Ethiopian male by the team he favors... Granddads like Liverpool, dads ManU, and young men Arsenal. The emerging generation seems to be leaning toward Chelsea. Why all British? The BBC, of course. Next to Coke and Pepsi, Arsenal was the most visible Western brand in the country.

So says Angry Monk, taker of the above shot of a taxi driver in Awasa. His observations will come as no surprise to the supporters of the increasingly infamous "Game 39" plans for the Premiership announced recently by its chief executive, Richard Scudamore. Gunners' manager Arsene Wenger originally supported exploring the idea, but eventually acknowledged that opposition had effectively caused it to fall at the first fence.

He needn't have worried. The notes of a representative of the Football Supporters' Federation (FSF) from a meeting last week with Scudamore, reported to Londonist, suggest that the advent of matches abroad is seen by Premiership movers and shakers as a matter of when and how rather than if. Scudamore is quoted as saying:

We sit before you in the middle of a consultation process which has had an interesting start. There was unanimous agreement between the 20 clubs in principle - there was not a dissenter. The clubs have agreed there is enough merit in the idea to move it forward... so much merit in the idea that it's got to be considered.

In response to criticism of the proposals to play a new, extra round of Premiership matches abroad Scudamore is said to have conceded that without the consent of host associations the plan could not come to fruition, but to have insisted that one of the main reasons behind the Game 39 suggestion in the first place was to try to maintain unity by allowing the Premiership's lesser lights to benefit from the popularity of the biggest clubs in far flung territories. Fans in those places should also not be ignored:

I refute the suggestion that this is all about money. It's about a whole load of things before it's about money. We do have an international following and by serving it in this way we can control the wealth redistribution down the league. We have a responsibility to our fans on a global basis...

FSF representatives put it to him that this could be the Rubicon event for many supporters in England who might walk away from their chosen team and sport. He is reported as replying:

Part of the calculation the clubs have to make is to ask 'Is it going to cost us?' For how many people is it going to be the tipping point? For 16 years we have been losing various segments of our supporter base. We have lost some,but we have gained a lot more. Part of our assessment of this project will be those we'll lose and those we'll gain. We'll weigh that up in the 'is this worth it?' column. We know where the balance of the noise is [in the media and grass-roots furore over this proposal] - our difficulty is working out the weight of that. We know the feelings of those who are making the noise. We've only got 330,000 attending fans - we have to weigh that in the balance against other stakeholders.

We know many fervent football supporters are 100% against this proposal and many are expressing their displeasure via the FSF's petition. However, we wonder how many younger fans, conditioned to watching matches from the pub rather than the stands, will feel as strongly. They may also not be as wedded to the traditional league format as their match-going counterparts and might even see bold changes to the competition as appealing and adventurous. Scudamore is reported as declaring:

If they [the dissenters] fight above their weight it might put people off.

We believe that, whatever your view, you should be aware that the proposition of playing competitive matches between Premiership teams abroad appears to be a fait accompli without formidable opposition, and from that new beginning there might be no going back.

The FSF meeting notes were brought to our attention separately, but the folks at Pitch Invasion have posted the whole text if you would like to peruse it.