Pirates and Vikings invaded London late last week for a triple bill of metal, mayhem and melee. It was time for us to don our armour and grab our plastic axes - Turisas, Norther and Alestorm were in town. 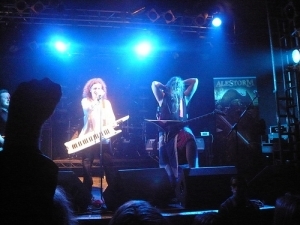 What are the best Scottish exports - whisky, haggis, prime ministers? Nah, we say. The newest product of Scotland to hit London came in the form of Alestorm, a rowdy troupe playing what they have termed "true Scottish pirate metal" which really describes their sound to a T.

Combining hearty singalong lyrics ("With the power of ale we could not fail") with driving rhythms the young (21-ish) lads from Perth really got the audience going in Camden's Electric Ballroom. Their set was quite short but very energetic, perfect for a support band, especially of the gimmicky variety. Sometimes it's good to let your hair down and admit that cheap and cheerful can be just as good as more highbrow offerings. 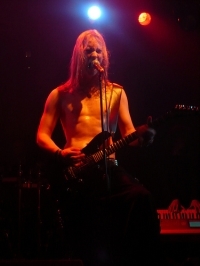 Finland's Norther took the stage next and rattled off a setlist that seemed to get fewer people pumping their fists in the air than the warm-up act. Certainly they didn't have the silly laddish charm of the Scots. We would quite frankly rather see lead vocalist/guitarist Petri Lindroos with his other band, Ensiferum (so it's lucky for us that Ensiferum are headlining the upcoming

Pagan Fest tour which reaches London on April 6). With a set list weighted heavily towards their latest album, N, Norther seemed to appeal mainly to the few hardcore fans in the audience; they didn't get the crowd going to anything like the extent Alestorm managed.

Turisas, on the other hand, tore the place up. After Norther's slight lull, the crowd was whipped back up into a frenzy of camaraderie and beer-drinking - with a subtext of cheerful violence - by the evening's headliners, sporting furs, armour and red and black war paint. The pit, which had become a slightly more civilised place during Norther's set, once more opened up into a jigging mass of large men wearing chainmail.

The set was dominated by material from the band's second release, The Varangian Way, which is our favourite ever Vikings-journeying-to-Constantinople concept album. The crowd merrily bellowed out the choruses, as the band played their brand of relentlessly upbeat, infectiously hummable and breakneck-fast folk metal. This is not a band to muse on the unending grimness of Viking life, its brutality, deprivations and filth; Turisas prefer to conjure up, musically and lyrically, magical vistas of fabled lands and heroic quests. Which is by no means a criticism. 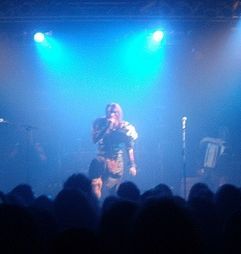 The frenetic fiddling of "In the Court of Jarisleif" prompted widespread dancing which turned the venue into a sea of elbows, while "Five Hundred And One"'s epic swagger was a particular treat, even if the ethereal female choir was sampled rather than live. Lead singer Mathias Nygård took a breather between songs as his bandmates helpfully played some smooth lounge music, and told us all about the band's troubles finding an accordionist to replace the one they lost in Amsterdam (apparently he just kind of got high and wandered off), as well as giving the audience the chance to tell him which beer he should be drinking (London Pride). A cynic would say that such digressions were a necessary time-filler, since Turisas have only released two albums, but they most certainly did not short-change the audience, with the encore consisting of the one-two of live favourites

"Rasputin" (yes, a Boney M cover) and "Battle Metal", the title track from their debut album.

Those two standards delivered with gusto, the band departed the stage and the happy, sweaty fans with streaky faces spilled out onto London's rainy streets clutching their limp plastic axes, dreaming of adventure.

By Kai, Fred and Jo