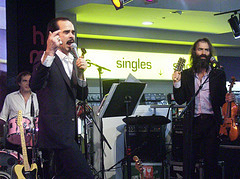 Seems like Monday was a good day for album launch shows. Whilst Londonista Dave was experiencing the fragile ether-eality of Goldfrapp in Union Chapel, we were in the slightly less salubrious surroundings of HMV Oxford Street, where a reed thin moustachioed man is hopping up and down preaching hell and damnation, or at least something about scissors and prolix, next to some guru-esque sixties serial killer lookalike who's doing strange things to strange things.

In-stores are an unnatural environment at the best of times, and truth be told, the Bad Seeds do occasionally look a little perplexed as to how they were talked in to doing this. But 'fair dinkum' to the boys, they give it maximum welly, ripping through most of the new album in a 45 minute set plus encores.

Cave is, as we suggested, even wirier in real life that we'd thought and his body twists and contorts as he bounces around the limited space filled with bizarre instrumentation, making the most of this odd event. As ever his voice raises a nodding smile on the souls of the damned, but between songs there's gentle banter, laughter, and a sign that there's still some more rehearsing to be done before the May tour: "Do I play any instruments on this next one?"

The new album, out now folks and available to buy or download, both legally or not, from somewhere close to you, sits somewhere between his Grinderman project and Abbatoir Blues, dark, edgy, melodic, full of mind melting lyrical curiosity, and yet also a whole heap of F. U. N. FUN. If this is the boss and his Bad Seeds in effectively a rehersal performance, then anyone with tickets for the Hammy O is a very very lucky punter indeed.