Londonist Behind The Lens: ~Misty~

By Lindsey Last edited 153 months ago
Lindsey Londonist Behind The Lens: ~Misty~ 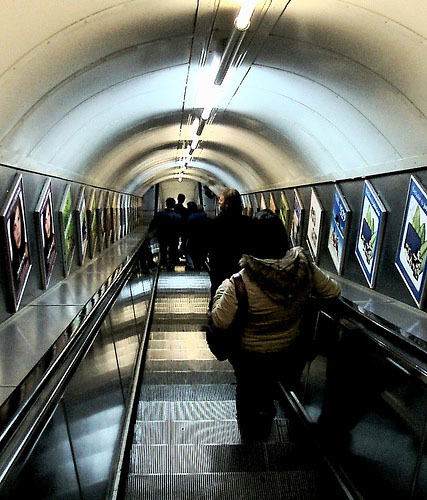 Going Underground: I like this one as it always makes me think of heading into the city and what adventures are to be had there. Also, the colours really make it stand out IMHO. I didn't have to do any playing about with photoshop, it's the way it came out. Anyway, in my mind, it's a very London shot.

If you’re ever in London and see a strange blonde wandering around, bumping into lampposts, and falling off kerbs into oncoming traffic whilst waving a camera around, it may well be me. My ‘real’ name, is Tina Hannan, and although currently unemployed, I keep busy with my blog and photography in the hope that somebody might buy a print or two! I’ve lived in London all my life and one of the main things I love about the place, is the massive diversity to be found, sometimes just by turning a street corner. From peaceful parks brimming with enough wildlife to rival the Serengeti, to a protest march next to a building made by the Romans, there’s always something new to snap at. I’ve been interested in photography since I was little, but only became passionate (almost to the point of addiction) about it since I got my first digital camera around four years ago.

Since then there’s been no stopping me and I carry a camera at all times, unless of course I’m in a place where cameras are forbidden. Right now I’m using my faithful Olympus 800, which is serving me very well. I’ve never had a photography lesson, and if I was presented with an array of fancy, expensive cameras with lens attachments and extra bells and whistles, I wouldn’t have a clue what to do with them. Except possibly sell them.

Taken almost twenty years ago on a cheap, instamatic camera, then scanned onto my 'puter. It was taken in Hanwell, and shows the comparison of the hustle and bustle of the inner city, and the tranquility that can be found all around if you take the time to look for it.

I just use my method known by some as “Ooh, look * clicky *” and usually, my piccies turn out fine, although I do play about with PhotoShop on occasion. My subject matter for my work is extremely varied; what would be a quick walk to the shops for some folk can end up as a two hour photo shoot for me as I start spotting broken tiles, birds flying by, and teeny-tiny insects just begging to be snapped for posterity.

One of my quirks is that as well as my camera, I always carry a small rubber duck with me, as I’ve found it very handy for a) making what could be a dull picture far more exciting, and b) balancing on people which will (if I ask them nicely) always guarantee a happy shot.

This has to be one of my all time, favourite photos I've ever taken! I'd already balanced my duck on officers of the law and local celebs, and one day I was out and about with a friend of mine. We'd had a few drinks, and as we approached St. James' Palace, he noticed the expression on my face. He fled in terror as I walked up to the guard, smiled ever-so-sweetly, explained that all I wanted to do was balance a small rubber duck on him then take a photo, and that although I knew full well he could not reply, I would take his not shooting or stabbing me with his bayonet that that was alright. I didn't get shot or stabbed, and I will admit to being rather 'proud' of this one. Not only does it have a quintessentially London figure in it, but also a rubber duck.

Anyway, I’ve found it very difficult to narrow down my choice of photos to just three; not because I’ve overly proud of my work, far from it, but because I love the subject matter too much. But narrow them down to three I have, and I hope you enjoy them as much as I enjoyed taking them.

Check out ~Misty~ on Flickr and at her blog, leave comments and let us know who you'd like to see featured here next.