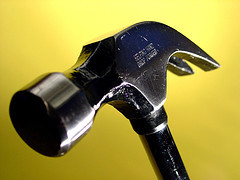 What's this city coming to when burglars threaten to kill an infant for a few credit cards and cell phones?

Recently, two burglars armed with hammers broke the front door window of a young Penge couple's home in Oakfield Road and made their way inside. The baddies demanded the scared couple turn over credit cards and pin numbers, and threatened to kill their 2-month-old if they didn't comply. We don't want to think about what would have happened had they not complied.

In the end nobody was hurt, but the thieves got away with a wallet and two mobiles, and they withdrew £250 from the man's bank account. They were last seen fleeing toward Penge High Street.

This yet-unsolved crime happened on February 5 at 1 a.m., and police are still looking for information that can help them catch these crooks.