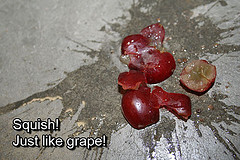 The great grape suit against Marks & Spencer is now over. Alexander Martin-Sklan, who slipped in the parking lot of his local store in Golders Green in June 2004, ostensibly on a grape that was stuck in his sandal, which may or may not have been acquired in the store or in its parking lot, has lost his case against the chain.

Though the judge was sympathetic to the 55-year-old man's plight — he had torn a tendon in his right leg and was claiming £300,000 for it as well as "adverse psychological effects and depression" — the judge found that the evidence was inconclusive.

Without forensic evidence of the grape, merely evidence of the presence of some "crushed fruit or similar" in the "void" of the slipper's sandal — not in a prominent slippage space — the judge ultimately said, "In my judgment it is one of those accidents that could happen to any one of us."

Now, to add to Mr Martin-Sklan's nearly four-year woes, he has to pay about £15,000 towards Marks & Spencer's costs.