Flasher Foiled by Gust of Wind 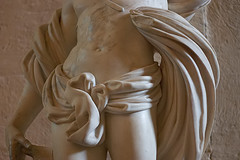 What a day for reporting on the male anatomy. Earlier, we brought you news about an airbrushed phallus; now we're reporting on one literally brushed by air.

Paul Rooke, 41, from Stamford Hill, felt his trousers weren't doing the job. His Dockers just didn't attract enough attention from the ladies. So the amateur tailor fashioned a loincloth out of a pair of shorts and took his mostly bare bottom half parading about Nottingham city centre.

Far from the jungles, London isn't exactly supportive of Tarzan garb among its mix of business casual, skinny jeans and skirts. Especially when a simple gust of wind can cause a wardrobe malfunction, as was unfortunately the case for this pants-free fellow and the bystanders who caught a flash of his nethers.

In court, the self-confessed exhibitionist claimed he didn't really want anyone to see his unmentionables and blamed the blustery day for the flash, but the judge didn't buy his defence that he was simply seeking attention. Really, low self-esteem shouldn't prevent a person from wearing his skivvies out in public.

Ol' gusty was given a nine-month prison sentence, suspended for 18 months, and can't appear in the UK "dressed in a way that is likely to cause distress or outrage."