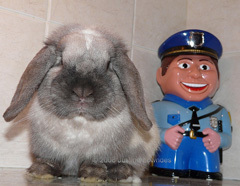 Looks like Paul Smith, a constable at Holborn police station, caught a case of reefer madness. He's been charged with 15 counts of cannabis theft — from the station.

While securing his stash from the evidence locker, the pothead policeman must have slipped up. Details haven't yet been released, but we hope he had a billy club bong, Snoop Dogg on his iPod and an inability to stifle his giggles every time someone said 420.

Whatever the situation, the cannabis cop's mellow was harshed when he was arrested on January 5. He resigned from his post February 21.

Tomorrow, the Mary Jane Met will be appearing on bail at City of Westminster's Magistrates' Court. We imagine he'll maintain that he just wanted to see what all the fuss was about since all the other kids are doing it (never mind that he is 33), or that he was "just holding it for a friend."