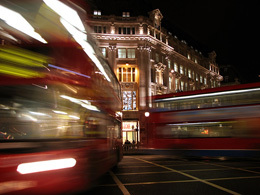 Unite lived up to its name today, presenting demands on behalf of bus drivers across the capital for a standard wage and agreement on driving hours to address considerable disparities across operators. This is their first coordinated claim since privatisation in the 80s.

Drivers working for different companies might currently be earning anything from £20-28K all in. Unite is calling for pay to be standardised at £30k across the board, recognising the key role drivers play in keeping London moving.

Unfortunately, they're not suggesting performance related pay dependent on braking skills - something we'd campaign for vigorously.

Meanwhile, TfL have announced the deployment of Safer Transport Teams in 11 inner London boroughs, following their success in outer London. They're also recommending the continuation of the inspirationally named "BusTag" and "Dip" teams that target criminal damage and pickpocketing, respectively.

Happier drivers and safer buses sound good to us.

Oh, and while we're on transport news - watch out underground, the Circle's line's suspended this hometime.