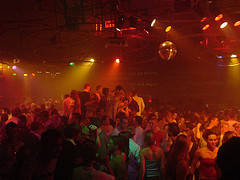 We've been known to hit the clubs on occasion to take a little tipple, do a little dancing and mingle with our friends, neighbours and hopefully a few attractive strangers. But a fun night can quickly turn ugly when an insult is lobbed, someone's pride is shot and the drinks shout "Fight!"

Still, it's most often a case of the bark being worse than the bite, not usually escalating past a few heated words or shoves, or maybe some sloppy fisticuffs resulting in a bloody nose or black eye if it's serious. And these stories rarely make the news.

Unfortunately, this has been a bad week for nightclub violence. We're sad to have to report on a shooting and a stabbing.

A week ago Saturday, a 17-year-old from southeast London named Tung Le was attacked during a row outside the Thai Square nightclub and restaurant on Cockspur Street. He underwent emergency surgery and was in critical condition until he died yesterday. His attacker, 18-year-old Chien Nguyen was charged with attempted murder and appeared before city magistrates last week.

Then, this past Sunday, at 5 a.m., a 26-year-old man was shot in the head and critically hurt near the Jet Set club in High Street, Harlesden. The injured man and his friend got into an argument, and when they attempted to walk away, they were followed. One was shot and is currently in critical condition; the other was struck over the head and suffered minor injuries. The Met believe there were about 15 bystanders who saw these events unfolding and are asking for anyone who hasn't yet done so to come forward with their story.