Tottenham: For Juande Only? 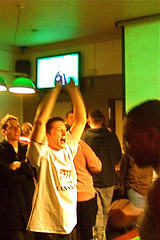 The world of English football wobbled a few degrees off its axis yesterday when a club not called Chelsea, Arsenal, Manchester United or Liverpool won a major trophy. This hadn't happened for four years, since Middlesbrough were victorious in the Football League Cup final against Bolton, but Jonathan Woodgate's one-two with Petr Cech ensured that Tottenham Hotspur would claim their first proper silverware since they won the same competition in 1999 under the stewardship of the hugely successful former Arsenal manager, George Graham.

Yesterday gave clear evidence as to why the Spurs board clumsily but doggedly pursued Sevilla boss Juande Ramos to take over from Martin Jol at White Hart Lane. A good manager can take you to a UEFA Cup place and maybe even a cup final or two, but at this rarefied level a proven winner in the dugout is usually the difference between going up the steps first or going up the steps longest. Ask Avram Grant, winner of several national competitions with Maccabi Tel Aviv and Maccabi Haifa, but at Wembley unable to provide the drive and inspiration to edge holders Chelsea past a Tottenham side finally laying hold of the self-belief that has eluded them for so long.

For all that he was anathema to the Spurs faithful, Graham, who left in March 2001, was their only manager of the last ten years to have consistently won major titles. Of his successors only Jacques Santini had won anything of note, when he guided the now indomitable Olympique Lyonnais to their first ever French league title. Jol won the Dutch Cup once with Roda JCK, but, like David Pleat at Luton, was noted more for his ability to stave off relegation. Pleat had got Spurs to the FA Cup final in 1987 but guided them to their first losing outing at that occasion while Glenn Hoddle had coached Chelsea to a similar cup final reverse before achieving the same with Spurs in the League Cup. Juande Ramos led Sevilla to two UEFA Cups in consecutive seasons which is stunning in this day and age.

Whatever Ramos is saying in his broken English, it's doing the trick. He may well not be saying anything particularly different to what Jol or the others may have said, but when the players look at him they know he's been there and done that more than once already and in the tumult of a one-off sporting occasion that is a crucial characteristic. José Mourinho won all the finals he reached with Chelsea and it's hard to imagine him emerging as so apparently ineffectual as his successor yesterday.

After Graham's day in the sun, however, Spurs wilted once more until Jol, perhaps at the top of the tier of "very good" managers, turned in back to back UEFA Cup qualifications. Ramos, though, after many years gradually working his way up Spanish football's version of snakes and ladders, is demonstrating he's a member of that elusive set of "exceptional" trophy-collecting coaches. Daniel Levy has acquired a special one, not one of the bottle. Recent football history suggests Ledley King will need to polish his triumphant lifting technique.