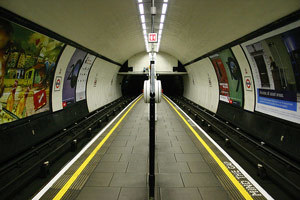 Tube travellers from Balham to Barnet are unhappy at claims the Northern Lane will be separated. According to leaflets being pressed into commuter flesh at Hendon station, TfL, like some latter-day Moses, has "recently announced plans" to part the oft-delayed line, creating two distinct services - one running south from High Barnet via Bank, the other from Edgeware via Charing Cross, with nary a switchover between the two.

Trouble is, the story's cobblers. While the idea has been mooted (a survey last year suggested little public support), there is currently no budget to make the switch, which would require a £70 million refit of Camden Town station. The leaflets, handed out by Barnet Council's deputy leader Matthew Offord, have been denounced as "deliberate scaremongering" by Hendon's Labour MP Andrew Dismore.

Offord has nimbly sprung to his own defence, citing Ken Livingstone last October, who admitted the separation could deliver "substantial benefits" but timetabled 2015 as the earliest possible date. Said Offord:

Livingstone has refused to rule out splitting the Northern Line at Camden. Until he does I will campaign against it.

Well, Ken hasn't (to our knowledge) ruled out flooding the entire network and equipping commuters with aqualungs and flippers, but we'll trust that's not on the agenda.

Commuters, ignore these scurrilous rumours. The true story here is one to warm the toughest of hearts this Valentine's Day: the intertwined branches of the Northern Line will continue their tempestuous love affair for the foreseeable future.