London On The Cheap: 5 Days Of Free Flicks Edition

By Lindsey Last edited 176 months ago
Lindsey London On The Cheap: 5 Days Of Free Flicks Edition 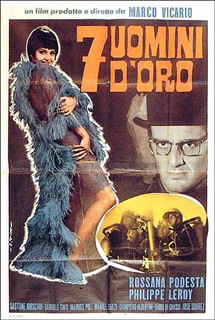 Following the Oscars this weekend there are free film screenings all over town this week. Edify thyself and make new friends running across 5 different genres of movie for no expenditure whatsoever.

Monday: The Duke Mitchell Film Club is holding heist night at the Cross Kings Bar on York Way with a long lost Italian heist movie "Seven Golden Men". The film starts at 8pm but there's also a "trailer trash" collection of vintage trailers being shown as well as music in between.

Tuesday: Dip a toe into the more thoughtful end of film with Club Filmosophy: revealing the thinking behind great filmmaking". Turn up at the Roxy on Borough High St for around 7.30pm for tonight's film Red Squirrel and expert led free-flowing discussion after.

Wednesday: Tonight, it's classic sci-fi at the Camden Arts Centre with Tron at 7pm. Take a look at Thomas Scheibitz' exhibition while you're there. He chose the film. Thursday: You've had heists, noir and sci-fi so catch an epic documentary this evening at the RSA on John Adam Street (off Strand). True Stories: Lake of Fire probes the abortion question from both sides. The documentary maker will be in conversation with the top dog at More4 after the screening. Friday: Combine free film watching with industrious crafts and get along to I Knit London Film Night for the irritatingly spelt Will Smith movie The Pursuit of Happyness. Turn up at the shop on Bonnington Square, Vauxhall early to get a space on their sofa. Film starts at 7pm. Or, you could stay in and scour the listings for rubbish films on telly.
If you don't like films then check out London is Free for more ideas of things to do for nowt. Check the websites for more information.