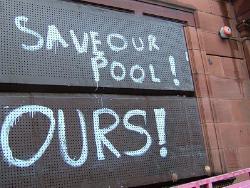 Lewisham is a bit harsh, innit? Wot wiv all the crime an’ all.

But there is also another side to Lewisham; one in which Victorian buildings co-exist with shiny regenerated areas, and where farmers’ markets and leisure centres are available for all to use.

Now Lewisham Council has decided to refurbish the oldest pool in London, Forest Hill Pools, which were built in the 1880s. The Pools were suddenly closed in 2006 due to safety fears. Regrettably, however, the regeneration involves demolishing the old Victorian building completely, and rebuilding new pools. While it is understandable that safety is of the utmost importance, it seems such a shame to tear down the existing building. It would be lovely if at least the façade could be kept, as has been and is being done with several other buildings Unfortunately it has been decided that retaining the front of the building is too expensive and, most importantly, would take much longer than tearing the building down and starting anew. All in all, however, it seems that both users and Council are in agreement that a brand spanking new pool complex is an exciting prospect for Lewisham Council and Forest Hill in particular.

London Pools Campaign which, well, campaigns for London pools, has a documentary about Forest Hill Pools up on their website, which you can access here.

And do try to come down to Lewisham once in a while. It’s really not that bad.