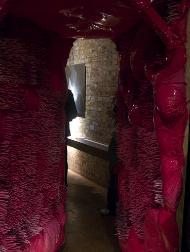 We really didn't know what to expect. An invitation from one of the participating students brought us here, but since Fine Art shows have been the most disappointing part of months of degree shows on Brick Lane over the last couple of years, our hopes weren't high.

Some of it was disappointing with works that were either lacking in visual merit, or others which showed promise with their presentation of clever ideas but were let down with poor execution. A case in point: one student's work featured stills from a computer game done so that they looked somewhat like reportage. A strong idea, but the presentation of the piece was lacking. Goddamn it - we want artwork that is as strong aesthetically as it is intellectually, otherwise we'd just read Critical Theory essays and have done with it.

There were also things that we simply didn't really get, such as a pink rubber-lined, vulval mini-corridor.

But there were also stand-outs: Luis Bujalance stained glass-like abstract work was visually arresting, while Noriko Matsubara's installation consisting of lots of tiny statues arranged around a paper-lined globe of light proved charming.

The most entertaining moment of the night: our open-mouthed response to the seeming audacity of the student who placed a card by a window that looked out onto Gabriel's Wharf, and called it 'Street of Earthly Delight' (or something like that). And then the following realisation that the work was actually a street of two-dimensional cardboard houses, with empty bottles of condiments, on a table in the centre of the room.

And who sent sent us the invite? None other than the mighty Holestar - a queer woman who dresses up as a drag queen. "The Tranny with a Fanny", as she calls herself, presented a performance piece consisting (we think) of a composite video of her, in drag, interviewing herself, out of drag. As this played she sat there in person, dragging her self up. We could talk about her art more but, frankly, she is art.

Words and picture by Oliver Gili.