Preview: Metamorphosis at the Lyric 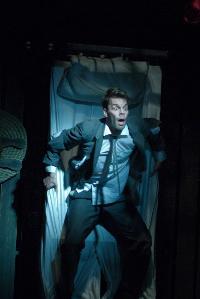 Last year, Icelandic theatre company Vesturport, in collaboration with the Lyric Hammersmith, staged a performance based on Franz Kafka’s novella Metamorphosis to great acclaim, and the theatre reported a 100% sell-out run. Now the Icelanders and the Lyric’s Artistic Director David Farr bring the play back for a brief three weeks, before touring it internationally. The cast has changed, but the story remains the same, as does the haunting music by Nick Cave and Warren Ellis.

In brief, Metamorphosis tells the story of Gregor Samsa, who one day wakes up as a giant vermin. While Gregor attempts to come to terms with his transformation, his family tries to live with him, or rather around him, for he is largely ignored and slowly almost forgotten. As Gregor diminishes in both spirit and memory, the family thrives, at which point the autumn performance concluded in an ending that was described as both poignantly exquisite, high kitsch, astonishingly sad and extraordinarily breathtaking..

If you missed the play the first time around or if you just want relive the acrobatics under the rafters, then the Lyric is the place to be. Providing highly physical performances, Vesturport promises a production that is equal parts intimate and impressive.

Metamorphosis at the Lyric Hammersmith, on now until 2nd February. Tickets and info here.

Image of Björn Thors as Gregor Samsa by Simon Kane