A Job That Slowly Kills You 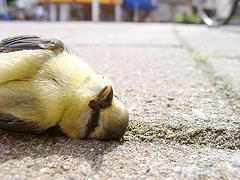 Anyone with an ounce of common sense should be able to tell you that work-related stress is not good for the health, a bit like cigarettes, junk food and bullets. But, since many of those who make decisions regarding our working lives seem to be devoid of even a gram of common sense and require THE FACTS instead, then a study reported in the European Heart Journal may help somewhat.

The UCL based study, an extension of research begun back in '67 and continued from '85, has been examining the effects of work related stress on the health of over 10 000 Whitehall employees, with particular relation to the effects of Coronary Heart Disease (CHD). It surmises that work stress can lead to us eating badly, exercising less, smoking more, drinking more; all things that will happily help terminate our tickers given half a chance (and boy do we like to give it a chance sometimes), but also that it has its own wicked way with our welfare.

So here's the science bit. The boffins have been able to show that stress appears to upset the bit of the nervous system that controls the heart rate. Additionally: Those who reported stress were also recorded as having poor "vagal tone" - the impulses which regulate heartbeat. We here at Londonist HQ think that heartbeat is very important for a healthy heart, so this news worries us somewhat. There's more science with long words that you can read for yourself.

So if you're feeling a little under pressure at your desk today, you might want to think about going home sick immediately, telling your boss you're probably on the path to Death's door.