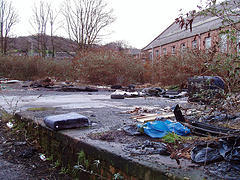 In years to come as historians look back on the events that triggered the untimely demise of this once great nation of ours, they'll probably be analysing the following timeline:

What could we have done to avert this terrible turn of events?

After all, London gets the Olympics, reaps the rewards of regeneration, cleans up afterwards and suffers if the whole thing goes tits up. We pay. Or, as the Bexley Pensioner's Forum state: these Games are for benefit for the whole of the United Kingdom, not just London, and so everyone should pay. That's a good point too. So who pays? Well you probably won't decide.

Bexley Council do not apparently support the pensioners withholding the levy but agreed that it should be nationwide. Good get-out clause for when we get all those shots on the news of aged folks being pumelled into dog food by men on horses. They then go and bandy about the words like 'levy' and after a brief moment wondering what Bexley councillors are doing galavanting about atop flood defences, we're struck with images of Henry 8, Robin Hood and poor people pissing in ponds.

We'll no doubt be back in a couple of weeks with reports of Bexley nick being overcrowded with elderly law breakers.