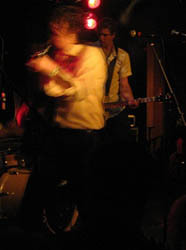 As another rock'n'roll revivalist spectacular pulls in the press, Londonist, once again, finds itself on the other side of town. Okkervil River are playing the last show in 3 months of solid touring and open tonight's proceedings by toasting the audience.

It is at precisely this point that the references we have from shiny silver disc: lyrically dark, yet often beautiful, occasionally expansive US indie alt-county rock, get drop-kicked through the plate-glass window of expectation by the beast of a band determined to deliver the party of the night. The boys are jumping up and down like over-excited schoolkids, waiting to join frontman Will Sheff, one by one, on opener Plus Ones.

And then, as the band might say, it kicks. Tambourines are bashed, off key backing shouting eschews the mics, lap steels and trumpets pop in for a dance. At one point there are four guitars up there; which on the tiny Luminaire stage is some achievement. Especially when Sheff is still hurling himself about the last remaining inches of floor space. He jumps into the front row to lead the audience clapping and pockets of deliriously drunken dancing break out around. It is the energised chaos of a band having a great time, all jokes and smiles. The Zeppelin, we once so wanted to be on, has well and truly been shot down.

Even the initially quiet ones break out into big fuzzy noise, and we're hard pressed to remember our favourites. Although storming versions of The President's Dead and John Allyn Smith Sails linger long after. Are these guys this good every night? Sheff is an engaging frontman, somewhere between Elbow's Guy Garvey and Bob Walkenhorst from The Rainmakers, taking only a moment to himself for a semi-solo rendition of A Stone (and not the Soul Asylum cover we were promised damn you), before leading his band of merry rabble-rousers through one last unscheduled encore for which we paid the equitable price of a half hour wait for a train at Waterloo.

Okkervil River are back next year at the Scala on Tuesday 5th February.