'Head To The Park 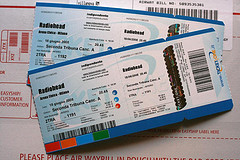 Anyone wanna go see Radiohead at Victoria Park next year? Tuesday 24th and Wednesday 25th June. That's Glastonbury week too, isn't it? Well presales are available now if you don't fancy getting up all early on a Friday. But be quick.

No word on whether they'll resurrect their 'tent' tour of Kid A days, that pitched up over in East London, but with favourable Rainbow reviews all round, it's a chance for the band to make up on some of that cash everyone saved whilst downloading the album for free.