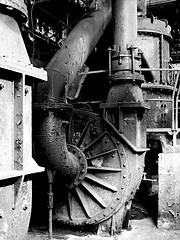 Well, the sugar people are actually living up to their somewhat irritating catchphrase at the moment, as they are being incredibly good eco-bunnies.

They are to install an awfully costly new biomass boiler (£20 million - in Londonist’s book that’s expensive: mind you, you shouldn’t get us going on the subject of the cost of plumbing…) at their East London plant which will burn on something called ‘wheat feed’ (a bi-product of the flour industry). Which is really, really cool.

In practical terms (and for the more technical amongst you) it means that they will cut their carbon emissions by 70%, and 70% of their fuel will be from renewable sources. Their carbon footprint will be 0.32 tonnes per tonne of the sticky stuff.

There have been all sorts of funny stories about cars running on fizzy pop and manure powered tractors over the years, but now it actually looks as if alternative fuels are a viable way forward for a variety of applications including heavy industry. Hoorah for the sugar barons and their wheaty bits. Apart from the fact that the term ‘biomass boiler’ so readily conjures scenes from a very bad 1950s sci-fi flick, Londonist thinks it all rocks.