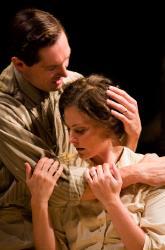 Finding a musical to truly like can be difficult these days. Musicals can be a bit pointless and ridiculous (hello We Will Rock You!) and often most fun if you’re a) drunk or b) intending to get drunk afterwards and thus not paying attention. However, we have finally come across not one but two musicals, currently playing in London, which are certainly worth our time.

First up: Hairspray, the musical based on the 1988 film by John Waters, featuring Divine and Ricki Lake. (The 2007 film, starring John Travolta, is based on the musical, of course, and not the 1988 film.) Hairspray does not need much introduction, suffice to say that it concerns itself with segregation and intolerance, but does so with charm and energy (not to mention a high level of campness) which means that it never becomes heavy-handed. Like all Waters’ heroines, main character Tracy Turnblad is the plump outsider in an otherwise size zero-obsessed world, but we see that beauty is on the inside and most definitely in the eye of the beholder. Newcomer Leanne Jones is pitch-perfect as Tracy, infusing the role with a naive raunchiness and a sweet charm that makes us root for her to become Miss Teenage Hairspray and get her man. The whole cast is brilliant, the weakest link perhaps being Mel Smith, although he does have a rather undemanding role and he does make the most of a scene in which he courts his Ball and chain.

Oh yes, the Ball. Michael Ball dons the rather large brassiere of Edna Turnblad and he is magnificent. He grabs Edna Turnblad by the...throat and embraces her size, frocks and make-up, and most importantly, looks as if he is having a... oh, you know. The prices are their usual West End steep selves, but for once it might be worth it. Go see this musical – it’s big, it’s noisy, it’s fun and it ain’t over until the fat lady sings – or, in this case, stops singing. 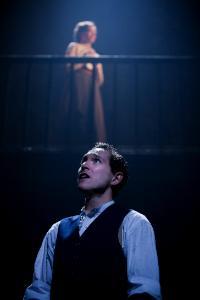 Parade is a different kettle of fish. It is the latest offering from musical wunderkind Jason Robert Brown, and after a successful run on Broadway, it arrived at Donmar Warehouse equipped with Tony awards and plenty of praise. Parade, like Hairspray, concerns itself with racism and a society in which being different makes you an immediate suspect. Somehow, even though these two musicals treat the same subjects, the executions are at first glance miles apart. Parade is based on the sad but true story of Leo Frank, a Jewish New Yorker who was lynched by an angry mob in 1915, for a crime he did not commit. The musical takes a wholly serious approach to its subject, so as to never cheapen or gloss over it. This is hardly a conventional topic for a musical, thought-provoking and touching rather than amusing, but entertaining none the less. At second glance, however, there are similarities, such as the use of sentimentality to underline the sincerity of the characters. In these performances, clichés are accepted by performers and audience alike, for they say only what we find to be true. So even though we might otherwise cringe at such sentimentality, rather than nausea, it is the honesty with which the songs are sung, that makes our eyes well up. The whole cast is spectacular, but special mention goes to Bertie Carvel and Shaun Escoffery who are spectacular in both singing and acting.

Hopefully this is a sign that the musical is on the mend and that there is more of this calibre to come. However you may feel about musicals, London needs them to attract tourists, and musical theatre needs quality to keep the respect that it as a genre deserves. Now bring on Desperately Seeking Susan.

Parade is only on until 24 November, so book now. Hairspray presently books until October 2008. Watch out, though, if you want to make sure to see Michael Ball – he’s on holiday in December so check those dates when the Ball has dropped (out).

Images from Parade by Johan Persson