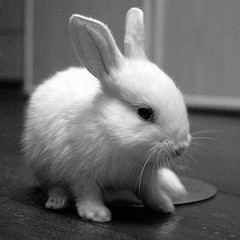 Irusia Armattoe of Teddington was dealt a heavy blow when a fire not only claimed her house and badly injured her, but also took the lives of 16 of her 30 beloved bunny rabbits. Yesterday, however, she thanked her neighbours for proving that some of us took those 'Love

Thy Neighbour' stitched samplers on our grandmother's wall to heart.

Mrs Armattoe, 65, was badly burned in the fire that broke out nearly two weeks ago when she tried to save her pet rabbits. Her neighbours, however, have shown a rare display of modern day compassion and have thus far pooled £200 to help Mrs Armattoe recover what's been lost.

The fire started in Mrs Arrmattoe's living room when she went to feed her rabbits and left a candle unattended. The whole of the ground floor, 75% of the first floor, and part of the roof were all damaged. The money donated by her neighbours is expected to replace the possessions she lost; the rabbits are expected to recover their numbers

Image courtesy of Ke Wynn's Flickrstream. This bunny was not burned.