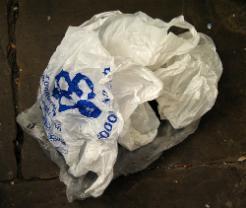 Whilst we, the London punters, expressed overwhelming support for action on throw-away shopping bags last week the big high street retailers have been mewing at the London Assembly opposing an outright ban.

Under DEFRA's new waste strategy the major UK supermarkets and other large retailers are committed to reducing the environment impact of carrier bags by 25% by 2008. Whatever that means. But they're reluctant to back a ban as it diminishes choice and convenience for their customers and threatens their relationships with current carrier bag suppliers. Indeed, threatens those suppliers' existence.

The Carrier Bag Consortium gives us all sorts of reasons why we should leave plastic bags alone. Certainly, they and the retailers dislike "demonising" them when there are plenty of other pollutant materials out there doing damage. Well yes, of course, but it seems they're willfully missing the point that this is an environmental issue that normal people can get to grips with (the Modbury campaign was entirely groundswell led) and do something about by making just a simple change to their daily behaviour. The consultation suggested that Londoners want this change. The retailers might just have to change with us.

The London Local Authorities (Shopping Bag) Bill is due to be deposited in Parliament on 27 November.