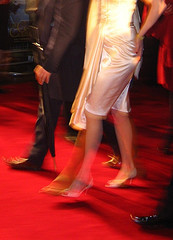 Hundreds of fans flocked to Leicester Square last night for the London premiere of The Golden Compass. Fans who braved the slightly rainy weather were treated to glimpses of stars Nicole Kidman and Daniel Craig, along with the thirteen year old star of the film Dakota Blue Richards and director Chris Weitz. Based on the first book in Philip Pullman's His Dark Materials trilogy, Northern Lights, the film has been the subject of much debate.

Although the film hasn't yet been released, there are already protests in the US by the Catholic League. They feel that the anti-religion sentiment of the film will be detrimental to children, although the religious element of books has been toned down for the film version. On the other hand, the UK's National Secular Society has spoken out against the decision to remove the anti-religion sentiment. Which just goes to show that you just can't make anyone happy.

We're also hard to please, and we're not fond of the choice to use the American title of the book, The Golden Compass, rather than the original British title, Northern Lights. We presume this is because Americans were confused by the original title (please see Harry Potter and the Philosopher's Stone v. Harry Potter and the Sorcerer's Stone), but it still annoys us. We'll let it slide that they didn't call it The Golden Alethiometer though, because really, who can pronounce that?

That being said, we do envy the fans who attended the premiere yesterday. Daniel Craig is dreamy. Sigh.