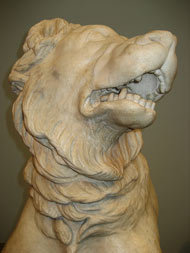 You'll forgive dear old Londonist for being a touch misty-eyed, but in our day a dog was a child's best friend, a source of companionship and a trusted pal through thick and thin. Times have changed though, and according to the RSPCA there's an increasing problem of pooches being used as status symbols and de-facto weapons, rather than the loveable pets who fetch slippers and chew the Sunday periodical.

Last year saw a 42% increase in incidents involving dangerous dogs across London. Wandsworth Council has called attention to the fact that many dangerous dogs are owned by inner-city youths, and they are looking at introducing dog licenses with age restrictions. The council has also highlighted fears that some animals are being used for intimidation, and in connection with robberies.

Kids shouldn't really be in charge of dangerous dogs, but perhaps their interest in animals could be channeled into less harmful activities. Send them down to Hackney City Farm or the like, and just you watch. Before you know it they'll be out walking the mean streets with a pot-bellied pig or billy goat on a leash. Well, one can hope, right?