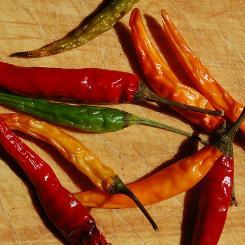 Soho streets were brought to a terrifying standstill yesterday afternoon when "a very hot and sharp smell" and a cloud of acrid smoke provoked chemical attack panic with police sealing off the area and closing roads.

The Ambulance Service dispatched a Hazardous Area Response Team Unit as Firefighters with breathing apparatus broke down the doors of the Thai Cottage restaurant. However, as The Times reported,

The surprised kitchen crew had been brewing up a mega batch of ultra hot, nam prik pao chilli sauce which requires a job lot of burnt birds eye chillis. Given this is a signature dish of the restaurant which has been in D'Arblay Street for 17 years we're rather surprised no-one in the area had an inkling that it wasn't in fact an insidous plot to immobilise London's media set by giving them all a really bad cough but the preparation of a much loved prawn cracker dip.

Freak out your neighbours! Get the recipe.