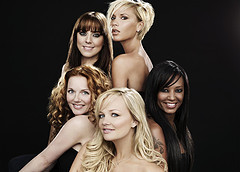 You might have heard - the Spice Girls are reforming for a few concerts. It wasn't very publicised, so you could be excused for missing it. Tickets for the London concert on 15 December at the O2 Centre went on sale on Monday and sold out in thirty eight seconds.

That means the tickets could have sold out 4.74 times while you listened to an average pop song.

Or they could have sold out 6.42 times while you watched the Wannabe video.

You could watch a man age 85 years, and still have two seconds to spare. (Careful with that link, though - it's got some loud music.)

If you're an average reader, it probably took you around 38 seconds to read this far.

Just for comparison's sake, here's how fast a few other recent concerts sold out:

Bruce Springsteen at the O2 – 10 minutes

Poor Take That. Do you think they're suffering from reunion tour envy?