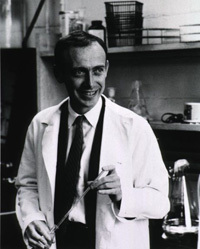 It turns out that being a genius doesn't mean you're a nice person. That's a lesson that the Science Museum reinforced today as they cancelled a talk by scientist Dr James Watson, winner of the 1962 Nobel Prize for his work in discovering the structure of DNA.

Watson was scheudled to give a talk at the museum on Friday, but this was nixed after his controversial remarks in an interview with the Sunday Times. The 79 year old geneticist claimed that black people were less intelligent that white people, and suggested that people working with black employees were aware of this fact.

Watson's courted controversy in the past, once claiming that women should have the right to abort a fetus if genetic testing determined that the baby would be homosexual.

There's no denying that Watson is a genius, but there's also no denying that he's deeply prejudiced. It's debatable whether or not this affects his scientific ideas, but we applaud the Science Museum's decision. Scientific lectures shouldn't be a platform to spread prejudice.

Incidentally, the Dana Centre, the bit of the science museum that organises science talks, has very admirably been holding special events in October celebrating Black History Month. They had one just a couple of nights ago called Scientific Racism: A History. How obliging of Watson to provide a contemporary example.

If you're set on seeing Watson in person, he is due to speak in Bristol at the Festival of Ideas on 24 October. We expect the Q&A portion of his talk will be quite illuminating.