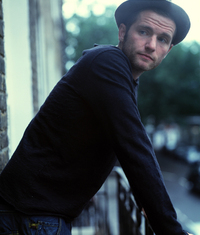 For such a large venue David Ford's gig at the Shepherd's Bush Empire on Saturday was a dreamily intimate affair. Playing songs largely drawn from his second album, Songs for the Road, the balladeer and musician's musician enticed warm applause from the 'incredibly cool' London audience, and, despite the restraining stalls seating arrangement, had those standing at the back singing and swaying along, so much so that it was hard to hear the lyrics at times.

Following up his latest hit single, Decimate – number one in Croatia this week – with a bashing out of chords on the upright using the stool seat, David removed his jacket and, sitting down to the maltreated piano, played a melancholy cover of the Smiths' There is a Light that Never Goes Out. The passionate singer's talented band provided backing for the travelling song, Train, inspiring a sing-a-long that intensified for the carousing 'old fashioned British drinking song', Nobody Tells Me What to Do. David finished the set with Song for the Road, accompanied only a backing singer and saxophonist.

The encore began with …And So You Fell a sobering ode to a friend who had committed suicide in the band's home town of Eastbourne 'where old people go to die'. Reviving the mood with a song that 'celebrates the things that make us a little bit shit', Cheer Up (You Miserable Fuck) ended with even those seated in the stalls singing the 'la-la-las' in an peculiarly polite fashion. A follow-up encore brought with it the announcement that "Michael needs to have a very important conversation with Janie" to which "she said yes". Congratulating the couple, David ended with an inappropriate song about betrayal, "Go to Hell", sumptuously layered upon the foundations of David's maraca, vocal and piano loops accompanied by his violinist — and so ended a sublime Saturday evening.