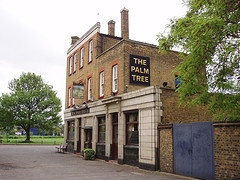 Even with the spectre of hazardous drinking looming over us, pubs are still our favourite places to be, so we were delighted to be invited along to the Fancyapint.com London pub awards 2007.

Fancyapint has awards in 2 categories. The reviewers' awards are based on their dedicated team's experiences over the year and a bewilderingly scientific system of tick boxes. The visitor awards are based on a not wholly scientific but ingenious manipulation of website usage data tracking how visitors use the site and which pubs they're interested in.

The award ceremony was no red carpet, glitzy do but a friendly and informal gathering in one of the winning pubs' function rooms - The Water Poet, Folgate Street E1 - with plenty of booze, affable chat and post gong sarnies. What's clear from mingling with the Fancyapint crew is that they really love their pubs. The big winners were:

Reviewers' awards overall winner: The Palm Tree, Haverfield Road, Mile End E3. A traditional East End boozer with a darts team, sausage rolls and bags of character. Watch out for an interview with the landlords soon.

Visitors' awards overall winner: Kings Arms, 25 Roupell Street SE1. Tucked away behind Waterloo East station this is pub picks up an award for the second year running for its location, ambience and quality of service. They also do some mean Thai food.

We're hoping some of the Fancyapint crew will be coming along to our birthday party next Thursday, 25 October at the Grafton Arms so you can quiz them about their choices then. We'll certainly be fancying lots of pints at this event so do come and join us to celebrate 3 years of Londonist!