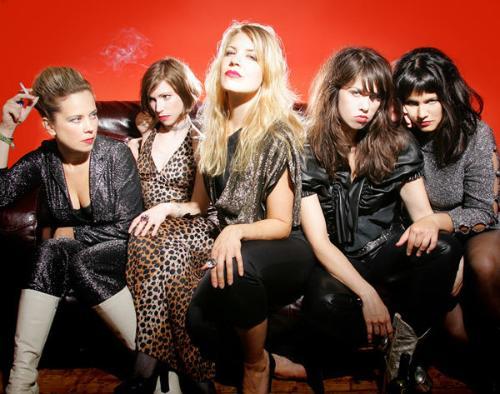 It's not everyday you come across a band with a name like Tits of Death, so it was about time we took 10 minutes with a band we'd formerly christened a ten-breasted rock machine. Playing Kinki at Madame Jo Jo's tomorrow night (Thursday), they've promised reduced guestlist to anyone emailing hello@titsofdeath.com with the subject line LONDONIST. Not only will you get to see this smokin' hot quintet but also electro-poppers Huski and the unbelievably amazing live Unklejam. A night not to be missed.

What's your state of play at the moment?

We’re bringing the rock to the northern reaches of the globe. Next stop Malmö, Sweden. Then back to England for some gigs here. We’ve also just released a shit hot 7” single. Iron Nipples.

Like a musical recipe gone awry. The Shangrai-Las meets Slayer with a hint of The Cramps and a pinch of Peaches or Add N to X.

Why should we listen to you rather than every other new band out there?

Because we’re the best there is and no one else can hang with our stuff. Or simply because we piss rock 'n roll.

The 100 Club. The place has got the history, one of our favorite sound men (Ray) and enough room on stage.

We’d play the London Dungeon if they would let us jump the queue for the rollercoaster.

No. However, we would go as far as putting together a weekend long busking festival if Wesley Willis was still around. He’d be our big headliner.

We get around. You might find us at Buttoned Down Disco (various London secret venues), Hot Sauce (Macbeth), Heavy Load (The Phoenix), Gypsy Hotel (Barden's Boudoir) or Round Our Gaff (The Enterprise).

You may find Tits of Death at the following bands' gigs: The Ghost Frequency, Die So Fluid, Jim Jones Revue, Sister, Little Barrie, Tracy is Hot and The Clap, and Chips for the Poor.

We rate Beyond Retro for its fine array of sequins.