By Londonist Last edited 180 months ago
Londonist The Shock Doctrine 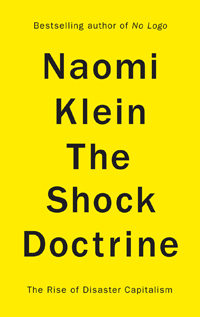 "I am not a conspiracy theorist", insists Naomi Klein. Twice, in quick succession. Followed each time by a nervous laugh; a telling laugh.

We are in the spacious surroundings of the Queen Elizabeth Hall on the South Bank, where Canadian journalist and activist Klein, whose 2000 book No Logo became a minor phenomenon in the halcyon days between the Seattle riots and 9/11, is promoting her new effort. The Shock Doctrine: The Rise of Disaster Capitalism examines how Western governments (for which read, principally, the United States) have become dab hands at exploiting and (in some cases creating) political and economic shocks for the greater good of Mammon.

First though, we sat through a short, and rather silly, piece of agit-prop cinema, scripted by Klein and Alfonso Cuaron and directed by the latter's son, whose hyper-kinetic editing style revelled in putting the 'shock and awe' trope into MTV-style filmic reality. Through a series of hard-hitting graphics and flashed-up, messages (culled, apparently, from CIA interrogation manuals), a sombre voiceover told the heinous tale of unfettered capitalism and its wild rampage across society's most vulnerable. Villain of the piece? None other than bespectacled economist Milton Friedman, who, in an unintentionally humorous montage, is shown posing beside a Who's Who of sinister right-wing leaders: Pinochet, Thatcher, Reagan, Bush.

As the credits rolled, Klein began her talk, which got off to a faltering start as she opened with a gushing list of thanks that seemed to go on almost as long as the film itself. Eventually, the talk began, and Klein gave an overview of how the book had come about. She described her recollections, as a young girl in the 1970s, of the news that CIA-sponsored psychological tests, under the aegis of Ewen Cameron, had been conducted during the Fifties at McGill University in her native Montreal.

The aim of these sinister experiments was to reduce the unwitting patients into a state of childlike catatonia, a tabula rasa upon which a new personality could be moulded. Klein identifies these techniques with the 'shock and awe' that Donald Rumsfeld famously promised would be meted out to Iraq, and she formulated the 'Shock Doctrine': namely, that by combing both physical and economic shock to a country, governments have been successfully attempting to reduce entire populations into the same psychologically raw mulch that the McGill experiments did, and thus softening the populace for new terms of economic makeup – such as privatisation of mass industry and foreign ownership of key state assets.

To whit: the Chilean coup of 1973, the Thatcher and Reagan revolutions a decade later, the introduction of laissez-faire corporatism in post-Soviet Russia, and – most recently and most damningly – the invasion of Iraq in 2003.

It sounds convincing, until Klein starts relying on a number of spurious examples. Citing Thatcher's invasion of the Falklands in 1982 as creating the 'shock' necessary to push through her more radical privatisation agenda is one thing, but suggesting that – without the war – Labour would have won the next year's election is ridiculous, as anybody who recalls the 'longest suicide note in history' would agree.

As for the 'looting' of Russia by the West in 1993, with Jeffrey Sachs sent into Moscow as a special adviser, was this really an example of Western manipulation? If so, how exactly did the West benefit? Fifteen years on, the vast amount of the wealth of the former Soviet state remains firmly in the hands of Russians, who are bossing the supposed overseer Europe both financially (Gazprom and Roman Abramovich) and militarily (the resurgent Russian aggression under Vladimir Putin).

On Iraq, Klein seems on sturdier ground. The manner in which Paul Bremer tore the country's nascent institutions apart, and allowed American companies to bid, unchallenged, for contracts on the rebuilding of Iraq's infrastructure, would seem to fit perfectly the doctrine at the heart of her book. The fact that, in Iraq, contractors vastly outweigh military personnel is an indictment of modern warfare as a profitable business model. And the correlation between the McGill experiments, and the torture at Guantanamo and Abu Ghraib, was instrumental in the book's formulation. Yet it wasn't long before the subject of oil came up, and Klein dutifully informed us that oil was indeed the sole aim of the Iraq war Yet as numerous commentators have noted, the gains from oil thus far have been minimal, and judging by the vehemence with which Iraqis view the black stuff as their birthright, it is unlikely that the benefits to Western economies will be felt any time soon.

Anti-Friedmanite screeds are hardly rare, yet this one seems to go one step further in assigning to his nefarious hand the entire economic path of the modern world. While his tutorship of the 'Chicago Boys' who ran Chile's economy under Pinochet is well-documented, and his influence in Britain and the Americas in the 1980s soberly acknowledged, can the late economist really be the sinister controller Klein depicts? What about the rise of India and China, whose policies are hardly textbook examples of Freidmanite policies? It's difficult to know just what Klein ascribes to the rise of these inchoate Asian superpowers, and one hopes it is a subject she covers in the book.

In interviews, Klein has stated that she wanted to reach out beyond the typical student activist niche that No Logo touched. Certainly, one way of doing so is by pricing them out – the £12 tickets had, judging by the audience, been snapped up by the liberal-left dinner partying crowd so skewered by the likes of Nick Cohen. Hence the Q&A session that followed remained milquetoast and reverent, although one cheeky question – what (if anything) does Klein like about capitalism? – drew appreciative laughter and appeared to stump her, as she jokingly cited her knee-high boots in response.

While raising some interesting points, the talk left far too many questions unanswered to truly convince. Without reading the book it's difficult to gauge how much of the shock doctrine is flawed thinking, and how much was just a natural result of trying to cram the work of a 600-page tome into an hour-long lecture. Judging by the wide coverage The Shock Doctrine has received in the press, it's likely the conversation is only just beginning. Just don't call it a conspiracy theory.