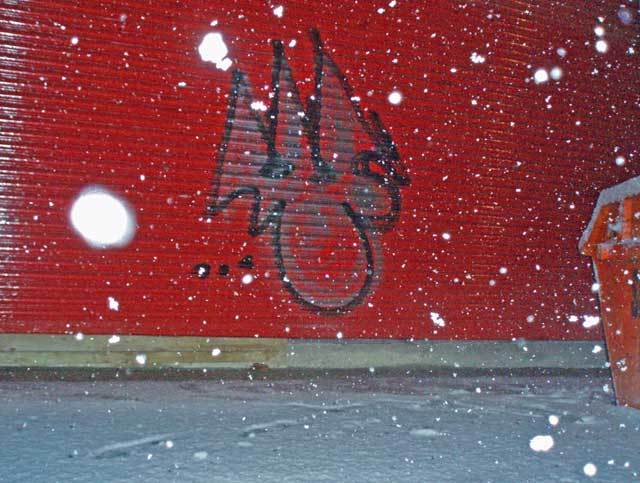 If you've spent any amount of time at all in East London, then you’re no doubt familiar with graffiti artist Tek33’s chunky, spray painted pitchforks. Asked what motivates the artist to “throw-up”, he explains that he does it for the buzz, that he has a passion for spray painting walls and not to getting caught, and that he has a deep love of graffiti art circa 1980's New York.

When did you first start making graffiti and how did you get into it?

I was a breaker in 85 (aged 11) and discovered graff through that, spraying “Break” and “Hip Hop” on my local fences. For my 12th Birthday on a Friday in 1986, I got a second edition press of Subway Art (by Martha Cooper and Henry Chalfant), and that was it: addicted for 21 years since.

My first tag was Jester. At the start of 1987, I chose Tech One. Then, I started one of my first crews, MWW (Mad Wild-Style Writers) consisting of Sketch (Mark Cheeseman RIP, I will never forget him) Idea, Shox and Scream. I used to visit the writers bench at Covent Garden in 1987 and got really inspired after meeting Robbo, Fura and Doze of WRH, also Set3.

In 1991, I started to spell Tek with the “K”. In 1995, I quit writing suddenly and unexpectedly until the autumn of 1999, when I thought ‘Why deny this urge and passion? Life’s too short. I am going to return to do one of the things I have always loved most in life - illegal writing.’ When I came back strong on the Northeast London streets for the year 2000, I wrote the number “33” and became known as Tek33.

What's up with those pitchfork/trident things that you paint?

Regarding the Trident/pitch forks, Eine had his Saba "S" throw-ups all over the West End/Soho in ‘89 and I was obsessed with them. I used to sit at home doodling replica Eine throw-ups. When I came back in 2000, I was looking at an old Cliff NYC subway panel and it had pitch forks like the trident but with a floaty Philip Guston feel. I developed my Trident symbol from that. Then I hit them up all over Northeast London, a touch of south but not really west.

Never been caught. But in 1993, a police officer grabbed me at Royal Oak, jumping out an unmarked car after spotting me tagging. He said ‘too late lad’ holding me, but I grabbed the road side rail, jumped up, ripping off my pocket as he fell over. I bolted fast down the canal and came out safe at Queens Park, minus my pocket on my parker.

Learn more about Tek33 at BeforeChrome.com