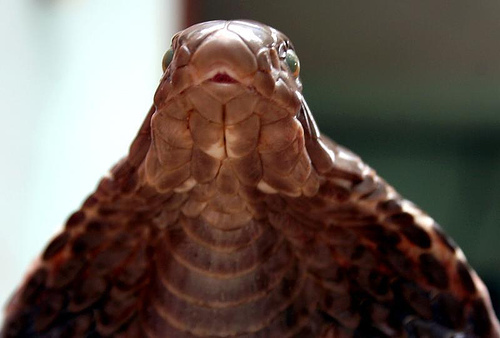 Most of our male readers won't really comprehend this, but the launch event for new posh shoes can be a big deal. A really big deal.

So when Harrods yesterday hosted a launch event for some ruby-sapphire-and-diamond-encrusted Rene Caovilla sandals (value - £62,000), they took security concerns a little bit more seriously than normal. Not for them a security guard in a cap borrowed from the nearest Asda. Instead they hire a live Egyptian Cobra to slither about a bit.

There are apparently 30 different types of cobra, and we're unsure whether this one was especially venemous. Knowing the famous department store, the snake probably left the building having spent most of its monthly salary on nicknacks, a trip to the food court and a souvenir branded mug for its mum.

A spokeswoman for Harrods commented that no one should fear getting bitten "unless you're a burglar". So far, so cutesy. Harrods has never shied away from tacky PR stunts, but this one seems rather silly. A poisonous cobra would have to be kept under lock and key (imagine it escaping and terrorising Kensington - you can almost feel the property prices plummet) and so any security purpose is entirely fictitious.

To get real cut-through with this, may we humbly suggest something to Harrods PR department? Wrap the cobra around the Diana/Dodi shrine currently sat under the escalators. Now that would make a REAL photo opportunity. We've always thought that there was something missing in the 8-ft high 'sculpture' with Di and Dodi's photographs encrusted with seagulls atop a trickling waterfall, some shrubs and four 'everlasting candles'. Add in a hysterical Al Fayed getting bitten whilst rescuing his shrine from a snake attack and you've definitely bagged yourself some headlines.