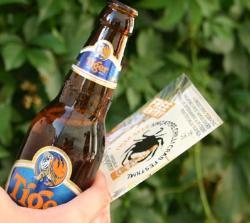 Sometimes a burger and fries is the only thing that will satisfy your hunger. Something simple and straighforward that you can hold in one hand, neatly packaged in two pieces of tasty bread that have soaked up the juices and sauces that ooze so delectably out of the multitudinous burger fillings piled up in between. But at other times... at other times, a person needs to pick delicately and carefully through the cracked shells of shellfish, fishing out pieces of tender meat that taste of holidays by the sea and mealtimes that take as long as they need to. Wash all that down with a cool beer and you've had yourself a good time.

Singaporean Tiger Beer is presenting a two day festival this coming weekend which we've already noted as free as well as delicious. On Saturday 1 and Sunday 2 September, the Truman Breweries, Vibe Bar and 93 Feet East will be the venues for cookery demonstrations, lion dances, art exhibitions by Singapore's hottest artists, martial art demonstrations, calligraphy workshops and a specially created grassy area for a little lie-down after all the excitement.

And of course, there will be lots and lots of Singapore's signature dish to enjoy: Singaporean chef Ronald Lim of Kiasu in Bayswater will be on hand both days to cook enough chilli crab for the thousands expected to turn up with rumbling stomachs and watering mouths.

If crab isn't your thing, and seafood brings you out in a rash, there's still chicken satay, the rice noodle dish Char Kway Teow and Hainanese Chicken Rice and the fantastically named desserts Ice Kachang and Bur Bur Cha Cha to try. And of course, rather a lot of Tiger Beer will be available. That crab can be fiery, and a cool drink or two may turn out to be necessary...